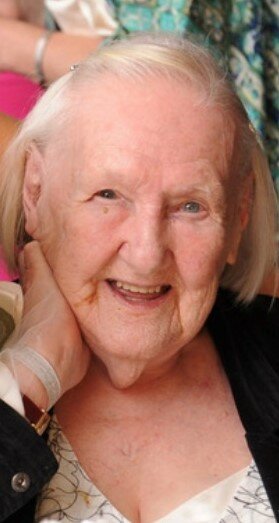 Please share a memory of Loretta to include in a keepsake book for family and friends.
View Tribute Book

Loretta McKay died peacefully in her home on Sunday, October 2nd. Loretta was born on September 30, 1920. She grew up in Astoria, Queens where she met her husband, Harold McKay. Together they moved to Williston Park, New York where they raised a family of five daughters. Loretta resided in Williston Park for almost 75 years and was an active member of St. Aidan's parish where she was a devoted member of a prayer group and attended mass daily for as long as she was able to walk. Loretta worked for many years for the Nassau County Health Department where she was highly regarded. She was a world traveler who loved to travel to many different countries and specifically to visit all of the historic churches and shrines of the world. Loretta was an avid reader throughout her lifetime spending much time at the Williston Park Library. Later in life, Loretta was a beloved grandmother to nine children, helping wherever she was able. Loretta lived to reach her 102 birthday, passing away just two days later. Loretta was predeceased by her parents, Loretta and John Sullivan, her sister Grace Neary, her brother Thomas Sullivan and her husband, Harold McKay. She is survived by five daughters, Maura Rossi (Ronald), Rosaleen Flynn (Culum), Sheila McKay, Bernadette McHugh (James) and Laureen Bubniak (Paul). In addition, she is survived by nine grandchildren and their families, Nadine and Panos Zotos, Mark Rossi, Andrew Flynn, Claire and Michael D'Emic, Christine and Kyle Grenier, Daniel and Kayla Bubniak, Joseph Bubniak, Jennifer Bubniak, Stephen Bubniak; and 3 great grandchildren, Anastasia Zotos, Nikoletta Zotos, Theodore Grenier, with three more on the way. Visitation will be on Thursday, October 6th from 4pm - 8pm with a prayer service at 8pm at Weigand Brothers Funeral Home, 49 Hillside Avenue, Williston Park NY 11596. The funeral mass will be at St. Aidan's Church, Willison Park on Friday, October 7th at 11:15 am.

Share Your Memory of
Loretta
Upload Your Memory View All Memories
Be the first to upload a memory!
Share A Memory