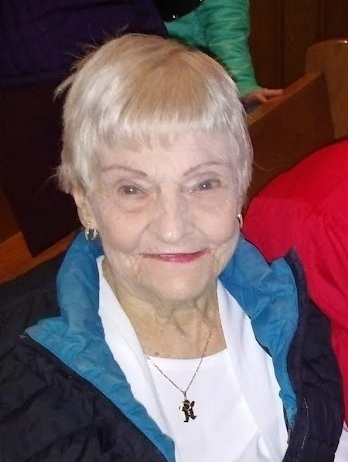 Please share a memory of Janet to include in a keepsake book for family and friends.
View Tribute Book

Janet Johann DeMilt, 88, passed away peacefully on Good Friday (April 15, 2022) with family at her side. It is with great sadness that we say good-bye to our beloved mother, grandmother, sister, aunt, and friend.

Born in June 1933, in Brooklyn, NY, to Richard and Gertrude (née Byrne) Weinbissinger, Janet, grew up in Richmond Hill, NY, with her sister Pat.  She attended high school at Dominican Commercial and worked on Wall Street before starting her family. Her first date with future husband, Bill DeMilt, began after meeting at a dance she attended with her Mom and sister Pat, and ended at a local White Castle, with her sister Pat in tow.  Janet and Bill married in June 1954, at St. Sylvester. After Bill finished his service with the Navy, they lived in Queens.  They eventually moved to an apartment a few blocks from her parents on Crescent Street in Brooklyn as their family grew.  In 1972, they bought their first home on Campbell Avenue in Williston Park – down the block from her sister Pat.

In addition to being a devoted wife, mother, and grandmother, Janet worked at “JC” as referred to by her husband – officially JC Penney’s for more than 20 years.  Aside from being able to contribute financially to the household, Janet developed a greater sense of self-confidence, independence and made many friends with her colleagues there.  Janet has been a faithful parishioner of St. Aidan’s Catholic Church for nearly 50 years and her faith was a great source of comfort for her during the difficult times of her life.

She enjoyed taking cruises and trips to the casinos with her husband and often joining her sister Pat and Bill Fischer. Janet especially enjoyed the company of her grandchildren and was always eager to learn about all of their adventures, their accomplishments and their latest game or activity.

She was an avid lifelong baseball fan, specifically of the Mets, and we believe she was listening in to their last few wins this week while we sat with her.  The Mets served as a constant companion to her every season, and we all enjoyed talking to her about her favorite players and if “this was going to be their year”: – if it is, she’ll be watching.

Married for more than 36 years, Janet was predeceased by her spouse, Bill; her brother in-law Bill Fischer and her parents Richard and Gertrude Weinbissinger.

We would like to extend a special thank you all of those who provided care, support, and served as advocates so that she was able to remain living in the home she loved as her mobility and independence declined in her later years

In lieu of flowers, donations can be made in Janet’s name to her grandson’s Mikey Conboy’s school, Center for Development Disabilities, Inc., 72 South Woods Road, Woodbury, New York 11797.

Share Your Memory of
Janet
Upload Your Memory View All Memories
Be the first to upload a memory!
Share A Memory