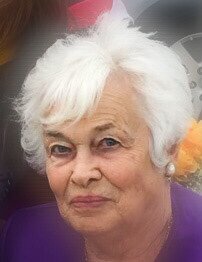 Please share a memory of Roswitha to include in a keepsake book for family and friends.
View Tribute Book

Kick – Roswitha (nee Horstmann), a loving and devoted wife, mother, and Oma, passed away peacefully on Wednesday, March 9 th at the age of 94. She was predeceased by her beloved husband, Karol, andher cherished daughter, Sonia McAuley. Roswitha is survived by her sons Peter (Arlene) Kick and Harold(Denise) Kick and her four grandchildren: Michael McAuley, Logan (Melanie) McAuley, Lauren Kick andEmily Kick. Born in Silesia, Germany in 1928, the youngest of ten children, she grew up in a tumultuous decade culminating in World War II. After the war ended, she met and married her husband, Karol. Theyemigrated to New York by boat when Sonia was a toddler, living in New York’s lower east side andultimately settling in Mineola, NY where she raised her family. Affectionately known as “Rita”, she was a great conversationalist and was beloved by many. She thoroughly enjoyed spending time with family and friends. She loved traveling, the outdoors, and was an avid gardener. After her husband passed in 1987, she volunteered at Winthrop University Hospital and found fulfillment doing so for the next 20 years. She also volunteered at Clark Botanic Garden. Please join us in a celebration of her life on Sunday, March 13 th at Weigand Brothers Funeral Home from 3pm to 7pm. There will be a service at the Funeral Home on Monday, March 14 th at 10am. Burial to follow at Nassau Knolls Cemetery in Port Washington, NY.

Share Your Memory of
Roswitha
Upload Your Memory View All Memories
Be the first to upload a memory!
Share A Memory