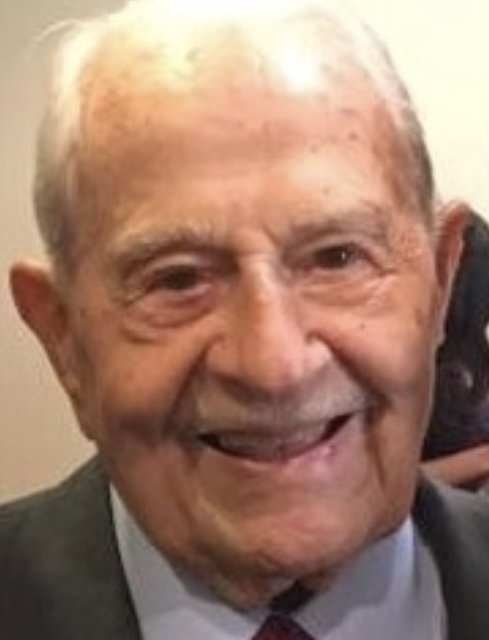 Fred was born in NYC and grew up in Brooklyn.  He was the youngest of his large Italian family of 7 children.  He met his wife, Viola, on a blind date and was married for 68 years.  He served in the Army in WWII.  He got married on a weekend pass in 1943 in St. Aidan’s Chapel in Williston Park, which is where he eventually bought his house and raised his five children:  Joan Buono (Bob); Richard Santopetro (Linda); Janet Timlin (Marty); Judy Granath (Mike); Joyce Conte (Dom).

Fred enjoyed spending weekends at Bar Beach with his wife, kids and extended family where they played cards, fished, swam and ate all day!  He worked in the printing business as a lithographer.  He would make the best homemade pizza in town!  He loved to play chess and used to teach school children in the Herricks Community Center.  He was a 76-year member of the American Legion Post 144 and was recently honored by the VFW.  Fred, who was just 6 weeks shy of his 104th birthday, was an avid Islanders fan and was thrilled to be the Military Hero of the Game at the playoffs this year!

Fred was an amazing man, who was full of love, laughter and an innate drive to help people.  His 5 children, 14 grandchildren, 11 great-grandchildren, extended family and friends will miss him terribly as he truly was one of a kind!

IN LIEU OF FLOWERS, DONATIONS CAN BE MADE IN FRED'S MEMORY TO:

Share Your Memory of
Fred
Upload Your Memory View All Memories
Be the first to upload a memory!
Share A Memory