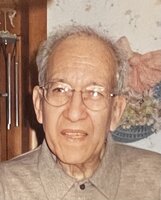 Jaime Barreto was born in Colombia, South America on February 4, 1928. In 1953, he came to the United States with his beloved wife, Helena Paramo Barreto, whom he married on December 16, 1950, and his firstborn son Herman. Shortly thereafter, Fernando/Jimmy (Eileen) and Martha (Corey) completed the family and they found a forever home in New Hyde Park. He passed peacefully on the morning of July 1, 2022, at home surrounded by loved ones.

Jaime was a beloved husband, father, grandfather, and friend to many--always quick with a joke or to join a game of chess or golf. He found peace in painting and spent many summer afternoons playing with his grandchildren: Casey, Alex, Dylan, and Katherine. He will forever be remembered for his generosity in both spirit and time, as well as his unceasing devotion to his wife and family. Jaime will be missed beyond measure.